Learn how WRTS and MBRTS are helping with COVID-19. Read here. 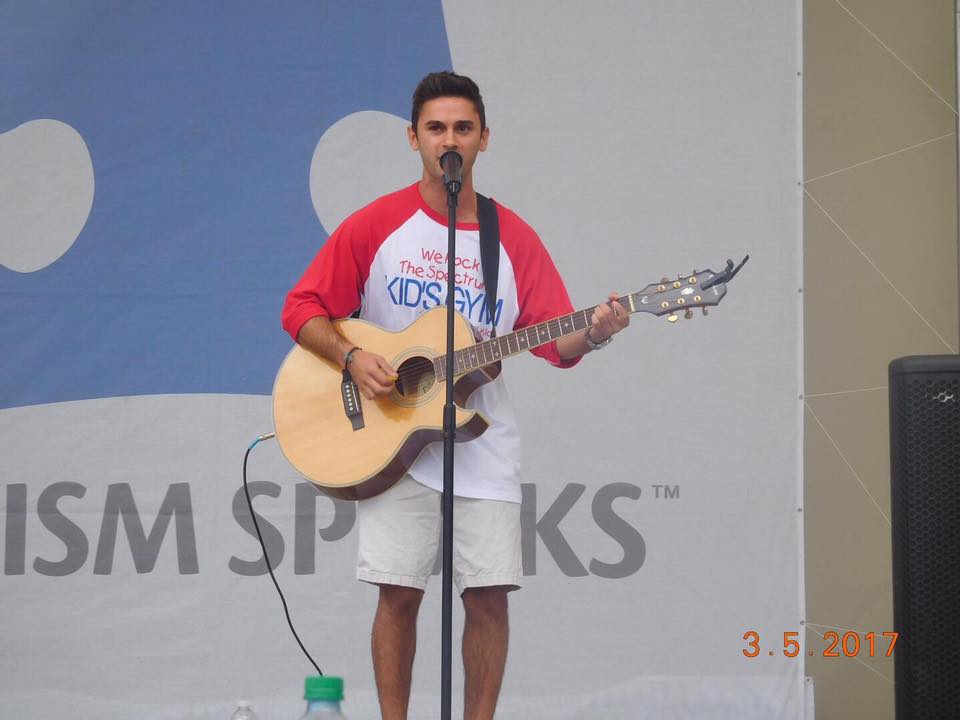 Brett Preiser is family to us here at We Rock the Spectrum – Boca Raton. Back when we first opened, Brett came into our gym and asked to be a volunteer when he was just a junior in high school. Since then, Brett has grown to be a familiar face in the Special Needs community in South Florida — and it’s all because of his talent and passion for music. In an interview with his mother, Jill, we get to know a little bit more about our rising star.

Brett and his family originally connected with our gym just months after we first opened our doors. Brett’s parents wanted him to get involved in something within the community during the summer. That’s when his mother, Jill, recalled hearing about a gym for special needs kids that had just opened and encouraged Brett to stop in and ask if they needed help.

When Brett came in, the connection between him and our gym owners, Gail and John Field, was instant and they offered him a volunteer job on the spot! Brett would spend that Summer as a volunteer helping with the kids.

A Child In Between

Brett spent his childhood in Connecticut, near Yale University. When Brett was one and a half years old, his mother, Jill, began to notice certain developmental issues with him that differed from his older brother. It wasn’t long before Brett was diagnosed with autism.

In Connecticut, the Preiser family fell in a lonely in-between. Brett was too high-functioning emotionally and socially to go to the special needs schools in the area, but he was low-functioning in math, timing, and other cognitive functions, making it hard for him to keep up with neurotypical students.

While Connecticut had all the professional resources that their family could need — from therapists to counselors — Jill remembers feeling lonely because they didn’t know any families like theirs or any other kids like Brett. So when Brett was eight years old, the Preiser family moved to Boca Raton.

A New World in Boca Raton

It was here in Florida that Brett’s life took to the path towards music. Shortly after the family’s move, Brett picked up one of his father’s guitars and began teaching himself songs and chords by watching YouTube videos. Brett cites The Beatles as one of his first musical inspirations. Brett’s mother says that music came very naturally to him and that he never needed to take formal lessons.

Over the years that followed, Brett never abandoned his passion for music and his talent developed more and more. He started playing at local venues around the community.

Brett’s music career in the South Florida community really took off when our gym owner, Gail Field, heard Brett sing and play guitar during his volunteer work at the gym. She knew that his voice needed to be heard, especially within the autism community where he would be a great example for children growing up on the spectrum. Gail connected the Preiser family with Autism Speaks and before you knew it, Brett was a headliner, performing at the Autism Speaks event in South Florida. And when he performs, he represents We Rock the Spectrum.

“[Gail] allowed him to spread his wings,” Jills says. “We are so grateful that a place like We Rock the Spectrum exists, not just for Brett but for all the families that need it.”

Brett still performs at We Rock the Spectrum – Boca parties and anniversaries, but with his newfound recognition, he’s also been booked for birthday parties, fundraisers, and private lessons.

“Music opens up a whole new world for him,” Jill says, “girls, friends, being around people — music gives him confidence.”

Through volunteering at We Rock the Spectrum – Boca, looking after the kids and giving music lessons, Brett discovered that he loved teaching and being a mentor. Today, Brett’s in college studying to be a music instructor, combining his love for teaching with his passion for music.

We are so proud of how far Brett has come and we know he will continue to shine.